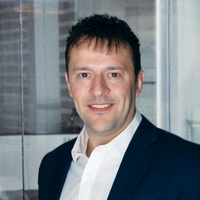 Jesse Schrock was born and raised in Lagrange, Indiana. He now lives in Walworth with his wife Tabitha, son Jaxon and golden retriever Captain. Jesse graduated from Carthage College in 2013 with a degree in Accounting and a minor in Economics.

Jesse began his career in Food & Beverage Operations with over eight years of experience. He joined the FORM Wealth team in July of 2021 to embark on a career in financial services. He is excited to take his passion for quality care and service into action at FORM. Jesse holds SIE, Series 7 and 66 designations as well as Life and Health Insurance licenses.

Jesse has a passion for service and making an impact on everyone that he gets to interact with.  He has an infectious drive for excellence and elevates those around him.

Jesse and his family love Lake Geneva and enjoy walking the many lake paths with Captain and boating during the summer. Jesse truly enjoys the outdoors and will often hunt, fish, or play softball with friends and colleagues when not at work.